A downtown pharmacy is here to stay with Wyandot Memorial Hospital’s acquisition of Koehler Drug Co. in Upper Sandusky.

Brenda Koehler of Koehler Drug announced the sale of the independent, family-owned pharmacy to WMH to continue local services for customers. Koehler Drug has been an Upper Sandusky tradition for over 87 years and Koehler indicated the sale was one of most difficult decisions she has ever had to make.

“It’s the ending of an era for our family,” she noted, “but I am glad the hospital is going to continue the legacy of offering pharmacy services to our community in the same downtown Upper Sandusky location.” 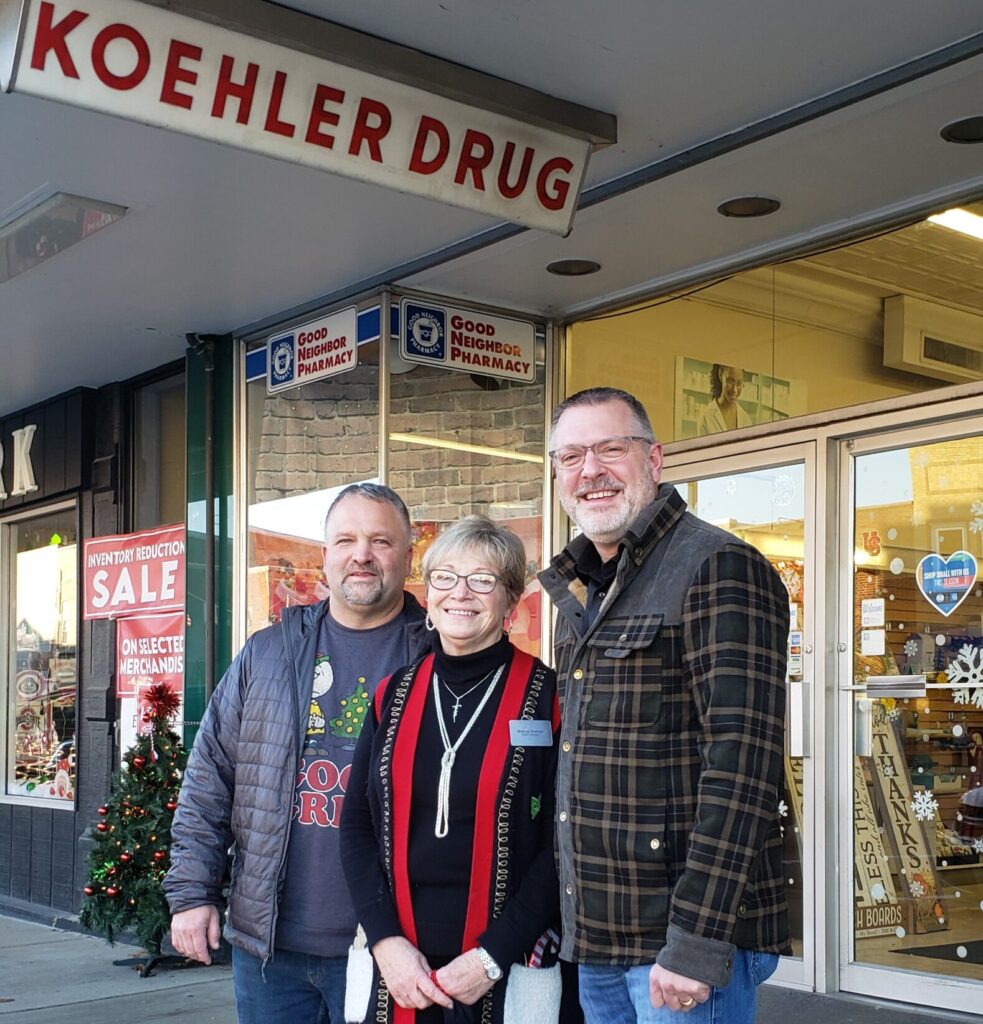 Brenda Koehler of Koehler Drug (center) has sold the business and property to Wyandot Memorial Hospital to continue local pharmacy services for customers downtown. WMH Pharmacy Director Scott Gier (left) will manage the retail pharmacy in addition to his duties for inpatient and outpatient pharmaceuticals at the hospital. President and CEO Ty Shaull (right) reported the hospital will expand or relocate services – possibly UrgentCare – to the new site and plans to retain some of the items available for sale at the store.

Owned by the Koehler family, Brenda’s late husband Andy Koehler began working there at the age of 14 and became the pharmacist after graduating from pharmacy school at Ohio Northern University. He worked at the store for 53 years until his death in 2017, at which time Brenda Koehler assumed the day-to-day operations of the pharmacy and store. She has now tallied 52 years there.

In contemplating retirement, Koehler remembered discussions between her husband and WMH President and CEO Ty Shaull dating back to 2015 when Shaull served as the hospital’s chief operating officer.

“Andy had expressed his hope that the hospital would be interested in our pharmacy,” she reported, “and I’m so pleased that the timing is right for both me and the hospital.”

Shaull agreed that the timing of the acquisition was indeed right for the organization and will allow for the expansion of healthcare services to the downtown.

“Our initial plans are to move UrgentCare to the Koehler Drug building,” Shaull explained. “Having UrgentCare adjacent to the pharmacy will be so convenient for patients needing a prescription filled after their care with one of our providers.”

The hospital’s on-campus pharmacy is not a retail pharmacy and unable to dispense medications to the public. The purchase of Koehler Drug enables WMH to expand into this service area.

“In collaboration with Pharmacist Andrea Donaldson, our Pharmacy Director Scott Gier will add the new retail location to his current responsibilities for our inpatient and outpatient pharmaceuticals,” Shaull said.

Gier is very familiar with Koehler Drug, as he worked at the pharmacy there early in his career and during times when the regular pharmacists were on vacation or on leave.

“Everything seems to be falling into place,” Koehler added, “for the hospital and for me, too. I’ll soon have more time to spend with my family.”

Shaull shared the transition for both Koehler Drug and WMH will require some time to accomplish due to the state’s pharmacy regulations and renovations needed for UrgentCare’s move downtown.

“We are grateful to the Koehler family for giving us this opportunity,” he emphasized. “In recognition of their longtime service to our community, we’ll refer to this location as ‘Wyandot Memorial Hospital at Koehler Corner.’”